Here are a few of the projects I’ve worked on. You can find out more about me on the About page, on LinkedIn, or take a look at my resume.

Ever was a consumer app for iOS, Android, and desktop with hundreds of thousands of monthly active users. Ever helped its customers back up, organize, and relive photos and videos. I was responsible for several major new features on iOS, including a new interactive, animation-heavy onboarding flow, and I was part of a larger team that re-wrote the main news feed in React Native.

Ever is the largest iOS project I’ve worked on, spanning many features implemented using several technologies (including Swift, Objective-C, and React Native), all designed carefully and developed with an eye to ease of use, maintainability, and performance. 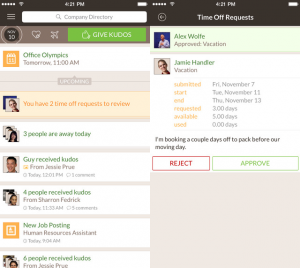 TribeHR for iOS (no longer available on the App Store) was a project created as part of the core TribeHR product, an employee-focused, cloud-based human resources information system. The iOS app was created to increase employees’ engagement in their companies by encouraging them to check in on company news, recognize their peers, look up contact details, and request time off.

We spent a lot of time sketching, prototyping, and revising in order to achieve this goal. We came up with an innovative timeline to aggregate all relevant information in one place, making for a very flat information architecture. Users could scroll backwards in time as usual to find news and other posts, but could also scroll forwards into the future to see what was coming up, such as events and colleagues going on time off.

We prized our thoughtful, collaborative approach to design, and we had a similar approach to quality. We focused on shipping a bug-free app with frequent updates, and this paid off in consistently increasing usage patterns.

During my time at TribeHR I made significant contributions to the core TribeHR web product, which was written in PHP. I was responsible for designing and maintaining the RESTful API, which was used in the iOS app. I was also involved in implementing new features and major architectural changes from time to time.

I wrote Concussion, the blog engine that once powered this site, as a side project while recovering from an injury. It was written in NodeJS and is open source, so you can check it out on GitHub. Its development served as an introduction to NodeJS and helped to keep my HTML, CSS, and JavaScript skills sharp.

OpenText Tempo Box was an enterprise-class Dropbox-like system for sharing files. I worked on many of its client apps: major architectural work on the Android, macOS (back then it was Mac OS X), and Blackberry apps, plus contributions to the iOS app.